It started while I was watching the news. But it wasn’t an old-fashioned “light bulb” moment when everything instantly becomes clear. Instead, it was more like the new energy-efficient light bulbs that take 15 minutes to turn on while you stumble around in the dark. That was when I first learned to surrender my career to God.

In seventh grade, I decided I wanted to be a television news reporter. This was in spite of my braces and obliviousness to current events. I held onto my dream throughout high school, college, two internships, and several jobs in the field. I lugged heavy camera equipment while wearing three-inch heels and shot my own standups. Once, I even blanked on live TV when the teleprompter wasn’t working.  None of these deterred me though. I loved creating videos and hearing people’s stories. I also loved writing.

Learning to Surrender My Career to God

In my mind, this was my career and nothing else would do. That is, until I couldn’t find a permanent job and was beginning to question whether I was even any good as a reporter. I also couldn’t afford to move from small town to small town anymore hoping to find a long-term reporting job while working side jobs to supplement my income.

Then I caught a break. After living this way for two years I was offered a job anchoring stock market updates for a financial website back home in Buffalo. This would allow me to gain valuable experience before I headed back into TV news, and also put me closer to my family again. You’d think this would be my Eureka moment, but it wasn’t.

Within a few months, I was shooting, writing, editing, and anchoring. I even had the opportunity to travel to Boston and New York City, as well as Toronto to cover the G-20 Summit and interview national and global political leaders. While learning to surrender my career to God, He was guiding my steps.

Not Everything Was Coming Up Roses, Though.

But because of poor management, the company lost a lot of money. Although I was able to keep my job, I wasn’t sure for how long as many others had lost theirs.  And this is where I was that key night I was watching the news.

In serendipitous fashion, the White House Press Secretary at the time, Robert Gibbs, came on the screen. Other than speaking on behalf of the president, I really had no idea what a press secretary did; yet I was determined it was the job I wanted. Surprisingly this wasn’t my Eureka moment either though.

The following weeks I solidified my determination to become a press secretary after researching the job and falling in love with the duties.  I would be in charge of getting a congressman’s message out to his (or her) constituents, either directly or through the media.  That night in my journal I wrote out the exact job I wanted: press secretary for a Christian member of Congress from my political party. I then offered up these dreams to God and went to bed. The following week I collected a list of job openings, cleaned up my resume, and started applying with bold excitement.

Weeks went by, then months. While I had already worked in the media field and had even minored in political science I naively thought landing this job without any prior experience on Capitol Hill would be easy.

So I booked a flight from Buffalo to Washington, D.C., and lined up meetings with acquaintances already working on the Hill to get more advice.

While I greatly appreciated the time they gave me, I left most of my meetings with nothing more than a half-hearted slap on the back and a “good luck” farewell. But that was preferable to the honest people who told me I’d never get a job on the Hill until I got Hill experience. (Then…how?) Even if I was lucky enough to get a job, I was told, I couldn’t expect anything more than an entry-level position. Surrendering your career to God is not always easy. (RELATED: How I Learned to Trust God’s Timing In My Life!)

I like to think that I am a hard worker and that any worthy goal is worth your blood, sweat, and tears, but all this was very disheartening. Quitting my job and moving to a new city without any income not only sounded unappealing but irresponsible – especially when I had already had a job and tons of people around the country were struggling to find one.

Besides sending out a few cover letters here and there, I slowly gave up on my dream and resigned myself to staying in my current job for the unforeseeable future. It’s about letting go and letting God work.

Months went by and I was near my breaking point. I was frustrated in my current job and there was a strong possibility the company would go under anyway. Fortunately, God had other plans.

During my prayers one night I stopped fighting against God, and instead relinquished my will to His. That is I surrendered my hopes and dreams to what He planned instead of what I desired.  If He wanted me in Washington, D.C., somehow, He’d get me there. If He didn’t, He had another opportunity for me that would be even better. For the first time in years, I felt at peace.

In the meantime, I would accept where He had me. I would practice contentment and express gratitude for all that He had already given me. I might add that in the job I was in I was dealing with a very difficult co-worker. On a daily basis, she tried to get me to quit. Here’s how I turned that Enemy into a Friend.

This was my real Eureka moment; I just didn’t know it yet.

The next morning I went into work and let a call from a number I didn’t recognize go straight to voicemail. I probably wouldn’t even have listened to it for a few hours except I noticed that the area code was from Washington, D.C.  It was a staff member calling me from a congressional office that received my resume. He said he would love to interview me for…their paid internship. Sometimes surrendering your career to God looks like an unexpected opportunity.

While obviously, this was not my dream job, I thanked God.

Truly, this call reminded me yet again that He was at work. I then booked the soonest flight I could to D.C. I was not letting this opportunity getaway.

It went well and within a few hours, I was offered the position. These events happened so quickly my mind could hardly process them – this was really happening! A few weeks later my parents and I packed up their car and headed to D.C.

This was really happening.

I worked hard at my internship, but I also knew I only had four months to find a full-time job. So, I hit the ground running. I met with every press secretary I could to get advice on how only how to get that job, but how to do it well once I did. And for a person who gets anxious about practically everything, I was surprisingly calm during these weeks. I knew I was in the midst of God’s plan and whatever happened would be good. Not necessarily what I thought I wanted, but good.

I wasn’t applying willy-nilly to every job that came available either. Staying true to my prayer almost a year earlier, I knew I only wanted to work for a Christian Member of Congress from my political party. That narrowed the number of cover letters I sent out to a grand total of two.

But I didn’t have to wait long. A week later and a month into my internship I got a call. It was from the chief from one of the two offices I had applied to. He asked me when I could come in for an interview.  I could hardly believe it; this was the first job I had applied to.

A few days later, I left the interview feeling like I had ruined my only chance.  I had stumbled over a few questions, making it even more surprising that a few days later I was asked to come in for a second interview with the Congressman himself. Would I? I would indeed!

But then doubt crept in and I left my second interview feeling even less confident. After all, they were probably interviewing others who had more experience than me and fit in the office better. But, as God would have it – literally – I got the phone call I had been hoping, praying and dreaming about for over a year.

My prayers were finally answered.

A year after praying about this exact position, I was offered a job to be a press secretary for a Christian Member of Congress.  I called everyone I knew with the good news. But first, I thanked God again for His wonderful provision and in times like these – just plain good gifts. This is just ONE time God came through. Read about several other times He answered my specific prayers.

I’ve been on the Hill for almost five years now, but to observers, it seemed I got the job very quickly. But I knew differently. Besides a year of prayer, I had made the choice to relinquish my plans, and instead surrender to God’s.  And while my Eureka moment had come months prior, the day I was offered the job the light bulb finally turned on. That was when I learned to surrender my career to God.

(Also don’t forget to check out my post, “Are you using your talents for God or yourself?” 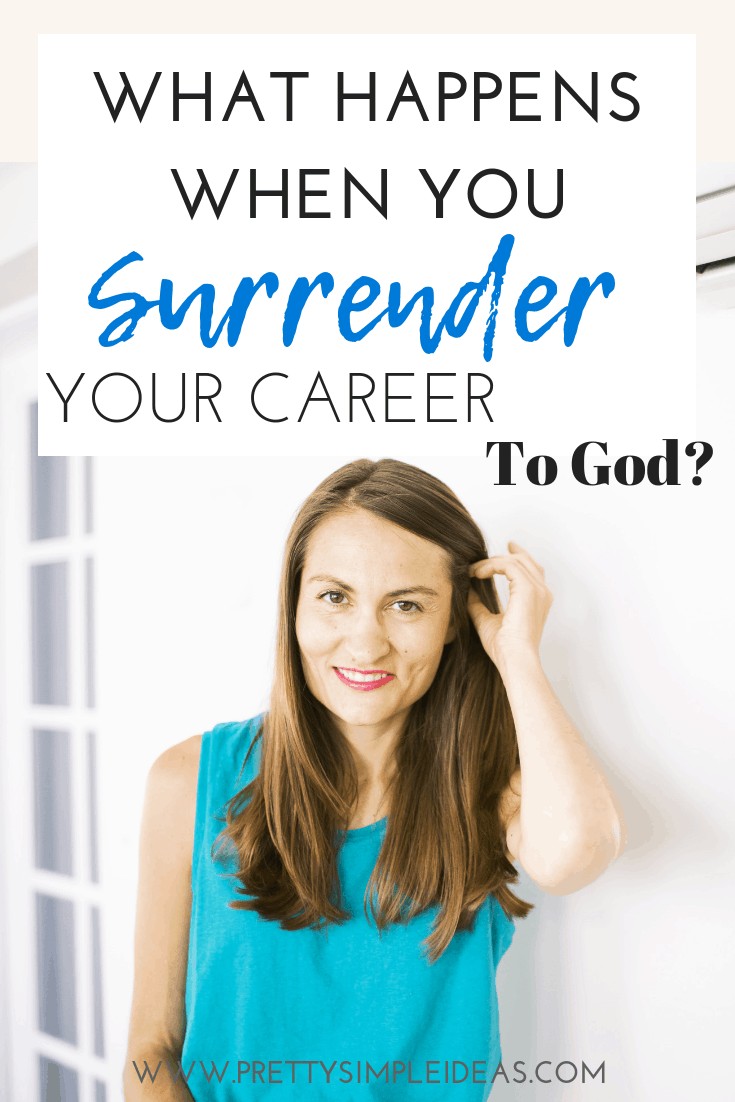