I gave my very first “speech” when I was 19 years old. It was in a public speaking class I was required to take for my major, and while that may not seem like a real public speaking forum, I assure you it was for me.

More on the quiet, shy side I was dreading having to stand up in front of my classmates and talk. Worse yet, the professor didn’t let us pick our topics but instead assigned them to us. My topic: how babies learn to speak.

Having known zero babies in real life at that time this subject was not only foreign to me, but sounded straight up boring.

That is until I started researching how babies actually learn to talk and I was hooked. Did you know that at 4 1/2 months babies can recognize their own name?

Anyway, I had done the hard work researching my topic, was genuinely interested in it, but when the day came to give my speech I still felt like I was going to throw up. Nerves are natural though and when channeled probably can actually fuel your speech.

So despite the butterflies in my stomach, I got up and started giving my speech. At first, my voice was quiet and shaky – not a good start. But the more I talked the more I remembered how interesting this information was and the fact that I was “giving a speech” sort of melted away. Instead, I was just sharing valuable interesting information with my classmates.

And instead of reading from my paper I started making eye contact with my classmates, trying to figure out if they were even listening.

Boy, was I surprised when I realized they were not only listening but look down-right interested.

So I pushed forward, laying out the next step of how babies (and consequently us!) learned to talk. About time I had finished I was literally floating on a job-well-done AKA I didn’t pass out high.  I was even more surprised a week later when my professor gave me an “A” with the note “If you’re not planning on going into public speaking someday – you should.”

Long story short, I didn’t. Or at least I haven’t yet. But I take every opportunity to develop this skill because I don’t want to just survive my next speech but thrive.

Perhaps you’ve been asked to give the Maid of Honor speech at your best friend’s wedding. Or maybe what it’s like to work in a certain profession to a roomful of workforce hopefuls. Regardless of the situation, I’m guessing you want to learn not only how to give a speech, but how to give one people will listen to. And if you want to as well, here are my tricks. 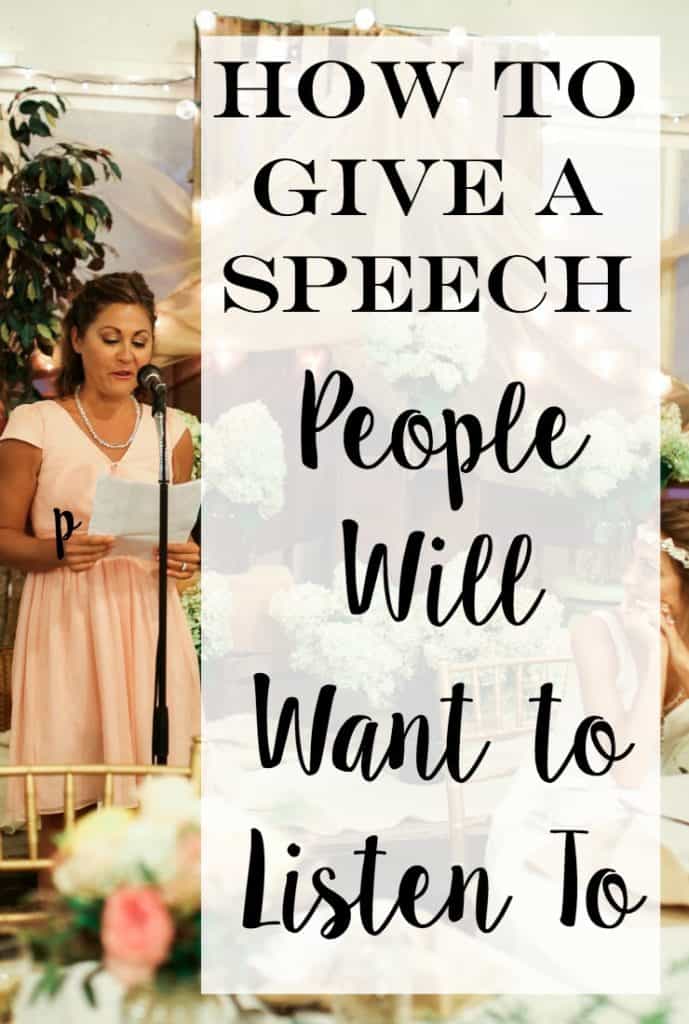 If you’re not interested in what you are talking about, what the heck would anyone else be? So maybe you were told what topic you would discuss instead of being given a choice. You’re up for the challenge! Find something, find ANYTHING that truly interests you about this topic and make sure that point shines.

2.) Don’t Talk To Your Audience, Engage With Them

How many speeches have you suffered through where the person reads from a piece of paper. READS STRAIGHT FROM THE PAPER.  Don’t waste anyone’s time doing this. Sure, it’s okay to write down notes or bullet points, but please never read to people with your head buried in a piece of paper.

Instead, try engaging with your audience.

Make eye contact with them. Speed up or slow down depending on what kind of non-verbal feedback you are getting from them, on how they are receiving your information. Tell jokes and SMILE. Pause for effect. Do people look like they are dozing off? Get their attention again. Shout if you have to. Yes, you are the only one talking but public speaking is still a conversation between the speaker and the audience.  Pick up on their cues.

3.) Remind Yourself That You Have Something to Say

4.) Use Language Everyone Can Understand; Avoid Jargon

Love him or hate him, but Donald Trump won over a majority of a nation in the 2016 election because he spoke in such a way that everyone could understand. There was even a quote in a national paper from an 8-year-old-boy who said he liked Donald Trump for that very reason. Even a child – someone people usually spoke down to – felt like Donald Trump wanted to connect with him.

Similarly, I already wrote a whole piece on using jargon in your writing and speech that you can check out. Don’t use words or phrases a majority of people don’t understand. People appreciate when it feels like you are on their level.

5.) Flow Naturally From One Idea to the Next

I once read a speech writing book that basically summed up writing speeches in these steps:

Well, I’m telling you to forget that advice.

Which brings me back to my first point: make the topic interesting. And please please please don’t give them a reason to tune you out even before you start. That’s why some speech givers like to start a speech with a joke, an anecdote, or something to catch an audience’s attention, gain their trust, and get them hooked.

While we’re ignoring the advice from my speech book, please don’t summarize what you just spent the last half hour sharing with them. Make it interesting so they catch it the first time. “And now in summary” is just another way to say, “And now you can let your mind wander again because I am going to repeat everything I just said…”

Abe Lincoln’s Gettysburg Address is one of the most well-known speeches in American history. At just over 270 words it’s also one of the shortest. What you may not know is that Lincoln wasn’t even the guest speaker that day.

It was Edward Everett, a former Senator and the current President of Harvard, who gave a whopping two- hour speech before Lincoln. It is also said that Lincoln was suffering from smallpox at the time. Combined with the length of Everett’s speech it’s even less surprising why Lincoln’s speech might have been so short. In a little more than two minutes, he succinctly said what he needed to say – and sat down again!

The editorialists of the day criticized Lincoln’s speech for being short and having no depth. Well, the jokes on them because it has become one of the greatest speeches ever made.

One of my favorite books to help with this is How to Write Short – I highly recommend reading it!

Which sort of lends itself to my last point. Don’t drag out a speech because you feel that a short one is not worth their time. When you’ve said all that you needed to say end it. Which is precisely what I am about to do.