The other day I got ready for church by putting on my Sunday best. It was a pretty, but modest dress. I wanted to make sure everyone could see how fashionable, yet God-honoring my outfit was. I knew a few women in the church that could use the example…

As I walked to church I passed a homeless man who asked if I could buy him a sandwich. I had to yell at him to move aside though – I didn’t want to be late for church!

A few blocks later I walked up to the old stone steps and was greeted by the pastor’s wife who thanked me for volunteering with the church at the homeless shelter last week. “Of course!” I gushed. All for God though, all for God!

While I waited for the service to start I got a text from my sister asking for a favor. Instead of agreeing, I shot her a quick response reminding her of the last time she didn’t help me, and she can ask someone else. I then put my phone on silent and in my purse. It would be rude to have it go off during the service for everyone to hear.

As the pastor started his sermon on forgiveness I emphatically nodded my head in agreement. Thank you, Jesus! A friend of mine then waved at me as she slid into the row next to mine. I pretended not to notice though. Last week she had told an embarrassing story about me in a small group.

But I quickly put that aside as the ushers came around to collect the tithe and I made a great deal of noise digging around in my purse for my checkbook. I then wrote out my tithe large enough so the person next to me could see. Hopefully, it would inspire them to give more to the church too! I also secretly noted who did not tithe… again.

And as the pastor wrapped up his message and the worship band starts playing, I closed my eyes as I lifted my hands because Jesus is so good!

Thankfully, that story is not real. But it could have just as easily been. We all know hypocrites or unfortunately have played one ourselves. Jesus also knew many hypocrites in His day, but as we learn from His teachings: There is no room for hypocrisy or “old ways” for those that claim to follow Him.

Are you pouring New Wine into Old Wineskins? 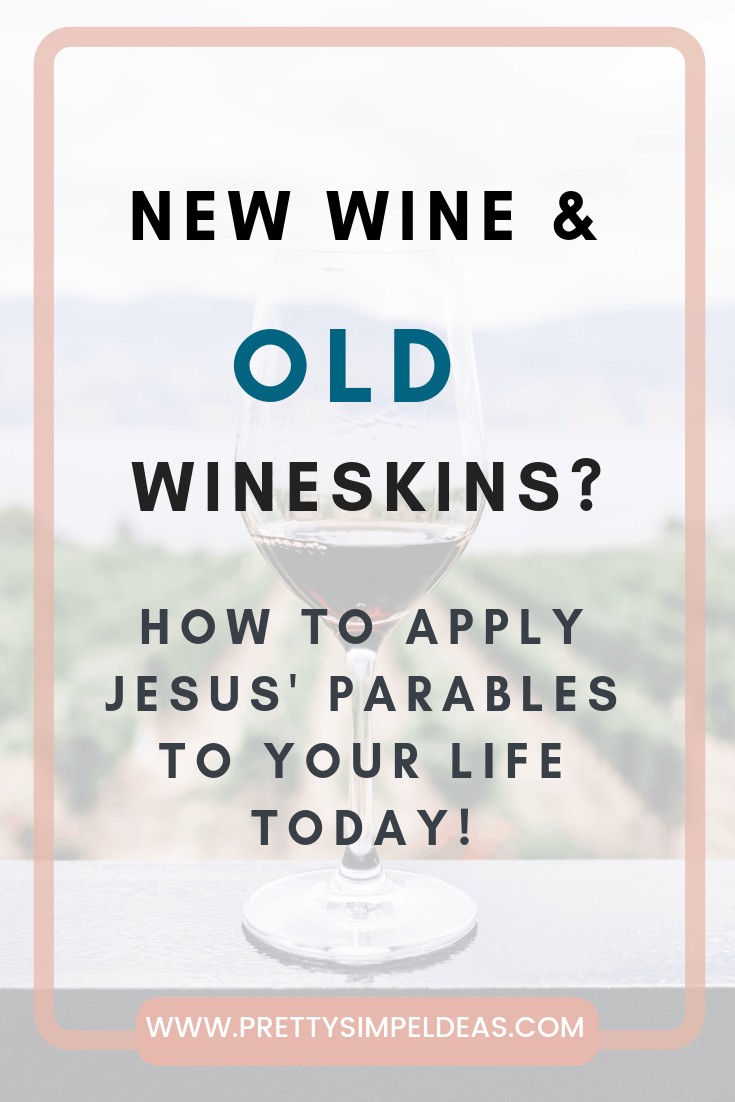 One day the disciples of John the Baptist came to Jesus and asked Him, “Why don’t your disciples fast like we do, and the Pharisees do?”

Translation: Why are your disciples not as “religious” as us?

But by questioning Jesus’ motives, He exposed their hearts. Jesus responded, “No one sews a patch of unshrunk cloth on an old garment, for the patch will pull away, making the tear worse. Neither do people pour new wine into old wineskins.” Matthew 9:16-17

Jesus wasn’t teaching them how to better preserve wine; He was showing them that He was bringing a new way of life and that their mindset was still old.  Jesus Himself was a new wine that the old wineskins could not contain.

“If they do, the skins will burst; the wine will run out and the wineskins will be ruined. No, they pour new wine into new wineskins, and both are preserved.”

You see, some “followers” at the time – Pharisees mainly but as we just read, even John’s disciples – were still clinging to their old rituals rather than embracing the Savior right in front of them. They wanted to continue in their man-made religious world that revolved around circumcision, sacrifices, rituals, legalism, spiritual-hardness, opportunism, and most definitely hypocrisy.

The Pharisees diligently followed the outdated rules we read about in Leviticus to keep up the appearance of righteousness. For instance, Leviticus 11:41-43 prohibited Jews at the time from eating anything that flies, crawls on its belly or walks on all fours.  They would go to great lengths to strain out any bug that may have found its way into their drink. They were also diligent about their tithing, giving exactly 10 percent of their spices to the Lord.

But while these rules could be good and useful, the Pharisees cared more about appearing holy than actually being holy.

In Matthew Jesus calls these “Teachers of the Law’ exactly what they are – hypocrites.

“You give a 10th of your spices – mint, dill and cumin. But you have neglected the more important matters of the law – justice, mercy and faithfulness. You should have practiced the latter, without neglecting the former.”

While striving hard to follow the rules, they also neglected the more important message: that God cares more about a changed heart than whether you drink a cup of water with a bug in it.

The rules in the Old Testament were put in place for a reason. But the birth, life, and death of Jesus brought a new covenant between God and His people. Sacrifices and rituals were no longer necessary; it was about obedience to God. Believers now have direct access to Him through the Holy Spirit. Being a “follower” is no longer about following rules, but a changed life.

However, the Pharisees continued to be more worried about pleasing men, than pleasing God.

It’s easy to criticize them for their ignorance, but unfortunately, we still cling to our own old wineskins too. Just like the hypothetical story I started with, we often care more about how we appear to other people than God. It’s easier to write a tithing check each week than to actually change our hearts.

We also want to live one way at work or around a certain group of friends, but then put on our “Christian face” right before we walk into a church service.  We’ve learned to “follow the rules” on Sunday, but then live completely different Monday through Friday.

And maybe you’re not out partying on the weekends before heading to church on Sunday. But how many of us have gossiped, talked sharply to a co-worker or friend, or told an inappropriate joke to get a laugh which we wouldn’t dream of doing within a church building because we know it would be looked down upon.

Paul reiterated this in his letter to the Colossians – a good indication that this teaching is still for us today. He wanted to know why if they believed in Christ and wanted to follow his New way, they were still clinging to their old wineskins and acting as if they belonged to the world instead. They continued to let themselves be ruled by man-made rules, instead of the Word of God.

We are Pharisees too, desiring the praise of men for being such a “good Christian” while living like everyone else when we think no one is watching. Jesus doesn’t care how good we look on the outside; He sees straight to the heart. But a truly pure and righteous heart only comes from hearing His Word constantly and surrendering to it.

No amount of striving or following rules will be enough to get us into heaven. But Jesus came to break the chains of sacrifice. Through Him, we now live a changed life of obedience to God.

The good news is that when we truly do give our life and heart to Christ – He will pour His new wine (the Gospel) into our new wineskin, and both will be preserved forever.