Have you gotten hooked on Shark Tank yet? It’s not just a show for hopeful entrepreneurs. If you’re interested in becoming a better public speaker, starting a business as a stay-at-home-mom, furthering your career, following a dream or becoming a leader in your field – it’s a show for you too.  And while the show is for both men and women, over the many episodes I’ve watched I’ve learned 10 lessons that women, in particular, can take away from it. 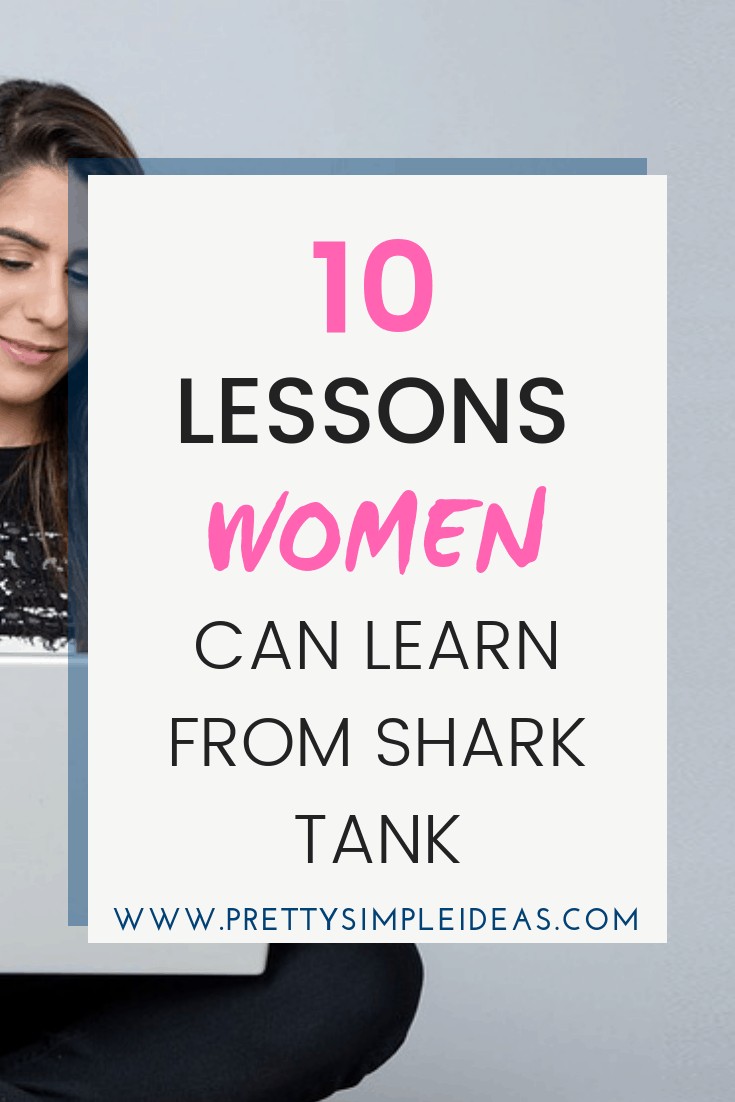 1. You can wear pink and still be smart, savvy and successful.

Just look at Barbara Corcoran who turned $1,000 into a $6 billion dollar real estate company.  Sure she wears the occasional black or blue but I’ve seen more pink on her than any other successful women around.  She’s fierce but still feminine.

Years ago I wore a Barbie pink belt to an interview thinking it was either going to work for or against me. (Disclaimer – I do not recommend this.) During the interview, I was asked how well I handled stress and I told them although my favorite color was pink, I was still one tough cookie. I was offered the position a few hours later.

2. Make Decisions Based on Intuition and Facts

Is a woman’s intuition real or just a myth? If the Queen of QVC Lori Greiner’s investments are any indication it may be more real than we initially thought.

Do you know which product has made the most money from Shark Tank? Scrub Daddy – a yellow smiling sponge that can be used hard or soft depending on the water temperature.

“I can instantly recognize a hero or a zero…” is one of Lori’s favorite phrases on the show and so far she hasn’t been wrong.  After deeming Scrub Daddy a “hero” she outbid Fubu creator Daymond John and venture capitalist Kevin O’Leary by offering $200,000 for a 20% stake in the company.  With her help, Scrub Daddy can now be found in every major retail store including Wal-Mart and Home Depot. It also brings in tens of millions in revenue.

Was it her intuition that knew Scrub Daddy would make so much money? Yes. But intuition based on three very specific criteria: Does it solve a problem? Can you sell it at a reasonable price? Is it appealing to the mass market?

If she can answer yes right away – she’s spotted a hero. I think women can have natural intuition, and if balanced with logic we can spot more “heroes” too.

I cringe every time I watch an episode of Shark Tank and the entrepreneur gives a blank stare when Kevin, also known as Mr. Wonderful, asks about their “profit margins.”  Every profession adheres to its own language –whether you work on Capitol Hill, in a law firm or even at home – and we’d all be wise to learn the lingo.

Years ago I used to work as an anchor for a financial aggregator site where I gave updates on the stock market’s mood that day and companies’ quarterly reports. Prior to that job I knew nothing about the stock market or financial terminology but was determined to learn. Over the course of two years I studied up on Initial Public Offerings (IPO’s,) Earnings Per Share (EPS), and acquisitions and became proficient in talking about them. It was not only critical to my job but helped me become adept too.

Check out this book on how to start and grow your company from the Shark Tank experts.

4. You can be successful, respected and kind.

As women sometimes we worry about appearing weak, whether at work or in relationships.  Friends of mine have told me they worry about intimidating men if they are a successful woman, or being discriminated against for the same reason.   Since we were little we’ve been told by the world that we have to take on masculine qualities to be taken seriously. And not just qualities like being aggressive and straightforward – but also sharp, bossy and cutthroat.  I don’t know about you but I’ve met plenty of men in the workforce that appreciate a hardworking, competent and kind female employee too.

Many times on Shark Tank the sharks have to deliver hard, but necessary truth to the hopeful entrepreneurs. I always appreciate their straightforwardness and honesty – and I appreciate it, even more, when they are kind about it.

As women sometimes we deal with the added pressure of proving ourselves in the workforce, either because of real discriminations or false pretenses.

Success and kindness are never mutually exclusive – in fact  – they complement each other quite nicely.

Mark Cuban loves to ask Shark Tank hopefuls the number one reason he should invest in their company. And what do most unprepared candidates answer? Passion.  Occasionally a shark appreciates hearing about passion but more often than not they hate it.  They want to hear numbers, bottom lines, and real concrete proof that this product is marketable.

Passion is great but always back it up with cold hard numbers…or as they like to say on Shark Tank “proof of concept.” If we want to run with an idea, let’s make sure our concept is sound…and then let our passion take it to the next level.

6. Don’t be overly confident, but know when to walk away, too.

The Sharks often accuse an entrepreneur of being greedy with their company evaluations.  Sometimes it’s true.  Ever meet someone who had an inflated view of themselves or their abilities?

But the sharks are trying to get a good deal for themselves too, particularly if they can make more money.  There are times when an entrepreneur needs a shark to save their company. Then there are times where the road may be long without an investor, but they’ll still make it in the end – and able to keep more of their own hard-earned money. The key is knowing the difference.  It is okay to walk away from a “bad deal”, whether it’s in your career or relationships.

I’m talking about ideas and in some cases, even dreams.  I feel for the entrepreneurs every time a shark tells them their product or company will never make it. If it comes from Kevin – most people shrug it off. But to hear it from Lori or Barbara is gut-wrenching because hard truths are often more difficult to hear from people who truly care about your success.

As a writer, I deal with this all the time.  I will write what I believe is an award-winning paragraph and yet I can’t make it fit into my whole piece.  But often it’s in taking out the ill-fitted puzzle piece that makes the whole picture finally come together.

Growing up I thought for sure I’d be a famous TV reporter if I just worked hard enough.  But my talents and circumstances didn’t back up that dream. I had to let go of it to grab ahold of another.  Though it was hard at the moment it finally leads me to more fulfilling jobs and careers where my talents finally matched my duties.

Please don’t take offense, but overall women struggle more with their emotions than men, especially taking comments personally. I know I do.

I’ve always been amazed at how guys can put each other down and forget about it a minute later. As a woman I often struggle with criticism not because of pride, but because I think they’re saying I’m not good enough or even that they don’t like me.  When work-related, I’ve learned to separate how someone feels about me personally… from constructive criticism or feedback.

Of course, I wish everyone delivered criticism with kindness but that’s not always the case. Don’t let it scare you. Let it help you become a better employee, daughter, girlfriend or friend. Your character will shine through, too.

We all like to be heard but it’s in listening that we learn. Many times on the show I’ve seen an entrepreneur talk over the sharks to try to get their point across. It’s always made worse by the fact that the Shark was just trying to offer them sincere advice.

Of course, we don’t need to take everyone’s opinion into account.  At the end of the day, we alone are responsible for our decisions in life but don’t miss out on a great piece of advice because you’re too busy trying to be heard, either. Through years of successes and failures, others have built up storehouses of wisdom and we’d be wise to learn from them.

And last but not least…

Has someone ever lent you a hand or invested in your success? Chances are yes and now it’s our turn to give back.

The Sharks’ ultimate goal for investing in an entrepreneur is to make money.  But unless you’re Mr. Wonderful it’s not the money that brings them joy. It’s seeing someone with a good idea succeed, and then turn around and create more jobs in their communities. It’s seeing the hard work pay off and a dream come to fruition.

Maybe you haven’t “arrived” in your career yet but you’ve learned a lot and are in a position to help someone else.  If ever asked to meet for coffee to give advice – do so willingly and joyfully. If you see a co-worker struggling with a project, offer to help.  Be the person people can rely on to step up because it’s the right thing to do. Seeing someone else succeed because of your help is just as rewarding as succeeding yourself.